A sold house, once a home, coming holidays and shedded tears.

I've been writing in English before, but not on Op de thee bij Le. I don't really know why, didn't feel right. I wanted the information, my feelings, experiences to be accessible for Dutch speaking people. There are so many English blogs and websites about everything I write about... but especially when it comes to epilepsy, or basically any chronic illness, it's very comforting when you can read in your own language.

This time however I decided to write in English, going with my gut feeling. That means that there probably will be some mistakes, that I try my best to capture my emotions but that I'm sure that some will get lost in translation.

People who know me, know that I'm an emotional *fill in the blanks*. Sometimes I don't even realize myself but luckily I have some great people that always find it very amusing to tell me that I'm very emotional.

So a couple of weeks ago, when I actually started this post but I got blocked, I watched Glee. I'm not really the binge-watching type but Glee however can make me forget time. Especially because it's a side dish serie. Side dish serie? Yeah you know, you can do other stuff while Glee is on. You can listen to the radio or listen to Glee. I definitely prefere Glee. However let's get to the point. I will first show you the reason of this blog post.

Hours later, under the showers I started crying. I couldn't distingush tears from water anymore. I watched this episode around the time my grand parents house was sold. A house, once a home, left my life. I moved around a lot. I'm 32 now and I've lived in 12 different houses (if I don't forget any) and my grandparents house remained a safe haven no matter where I moved. I always had one security. Off course my parents lived somewhere too, but if they move when you don't live at home anymore you somehow can feel lost in their new home. It's yours, without being yours...

But by selling my grandparents house, we also closed basically everything there was left to close up about my grandparents. Finished a sad chapter that started on December 1st 2009.


2009, when December stopped being all about presents and festivities and became the month of losing two of the most important people in my life.

2009 December 1st, it was a Tuesday night and I remember quite clearly being in Danish lesson, in Copenhagen. Mom called, I was in class, didn’t bother answering. Mom called again and again but I was in class, on my way home on my bike and when finally at home breaking up with my boyfriend. Then she called while I just broke up and still on skype with the guy (no I’m not that ice cold b*** that breaks up with her guy over distance, but off course it didn’t help). I told my ex-boyfriend to hold on for a sec. ‘Mom called several times now, something bad must be going on’. I picked up my phone and answered my mom, probably not in the nicest way (I was breaking up you know ánd she did already call several times) and she told me granddad (opa) was dead. Looking back to those times I should have known… my mom hardly ever calls. She mails, apps, texts… we are just not that great on the phone. Our conversations are waaaaay too long. Even nowadays when she calls I ask her: somebody died?

The moment she told me opa past away I I I…. till this day, 9 years later, I still cannot describe my feelings the exact moment she told me and tears still come up. Being 900 km away from my family, in a city I only could ask for food, time and directions, had no car or driver license to leave immediatly it felt definetly like a wrong place, wrong time kind of thing.

I don’t remember much about the conversation. Probably some practical stuff. When did it happen, how to get home as fast as possible… But the conversation ended and we hang up. I probably told the ex-boyfriend opa past away and that we would deal with all the practical break-up stuff later. I ended that conversation as well and went to my roommate. So much for went, I think I stumbled into the living room / her bed room for just a few steps. Sat down on a chair and said: Opa is dead. And I broke up with N. And. I. Just. Sat. For some very long minutes. Once the shock was somehow cleared I realised I had to take some action. I wanted to go home as soon as possible. So I had to get some ducks in a row. School, transportation, clothes… In less then 24 hours I crossed 3 countries, heard 3 languages and hugged my mom tight. Don’t even know if I ever hugged her so tight.

But I missed time, I missed crucial mourning time. It’s very strange to say but right after somebody passes away there is still something making it worth while to stick around for some hours. To make an effort on the looks, the way they rest till the last goodbye… And I missed those. Opa was already put on display. Nothing to do anymore. The travel made me so tired, the event so sad… I hardly remember anything of his death and cremation. And 9 years is not that long ago. I do remember though how beautiful the ceremonies were. Both church and crematory. Opa was loved, by so many people. And oh was I moved by all those who came to join us, December 4th 2009.  25 days before their 50th anniversary.

Off course having a loved one die so close to Sinterklaas, only the best Dutch celebration there is, can only mean one thing. We skip one year. Unfortunately we skipped all the other years after as well. Even though I think my granddad will roll over in his ashes to know we are not celebrating anymore.

Two years ago, December 12th grandma died. It was a total different passing away, total different ceromony. Looking back now, 2 years later, I think, when taking care of oma her last day and right after her passing, I have made up for all I wanted to do for opa but couldn't.


Because the dying and making ready for saying goodbye had such an impact on me this time I hardly have any clear memory about how mom called me, where I was…And it's not important either.

But since opa died in 2009 and oma went into a nursing home in, I think 2014, the house wasn't really occupied for a while. Then we found a temporary solution, but like all temporary solutions, they come to an end. So there it was, the 'inventory' walk. And even though we have been moving on it still was unexpectedly difficult. Difficult to walk throught the rooms, empty  or replaced by my uncles furniture but nevertheless filled with memories.

Me sitting next to granddad in the attic whilst he was playing the cello. I remember him playing Bach's Cello sonates and when I hear those (preferably by Yo Yo Ma) I'm that little girl again. Or with grandma in the all-kind-of-stuff room. She ironed clothes, she sewed, all the pictures of all the big trips were there, her beautiful drawings. Or doing yoga-gym in the same room with opa at crack of dawn. He was an early bird you know. And just like the birds he woke up when the sun only thought about waking up. The older he became the shorter his nights were.

Trying oma's bracelets which I inherited before she died. I loved to wear them as a little girl and she promised them to me when she'd die. I did get them. As well as the lamps she maked herself. But most of all I got a sh*t load of love, care, wisdom, things you have to know about the world, decency from the both of them.

The house, once a home, is sold and totally empty and not ours anymore. It's just a drive by memory. A memory that won't get lost. A memory that will continue to stir up some emotions. And a memory I wouldn't change for the world.

Other blogs about oma passing away opdetheebijle.be > oma (dutch). 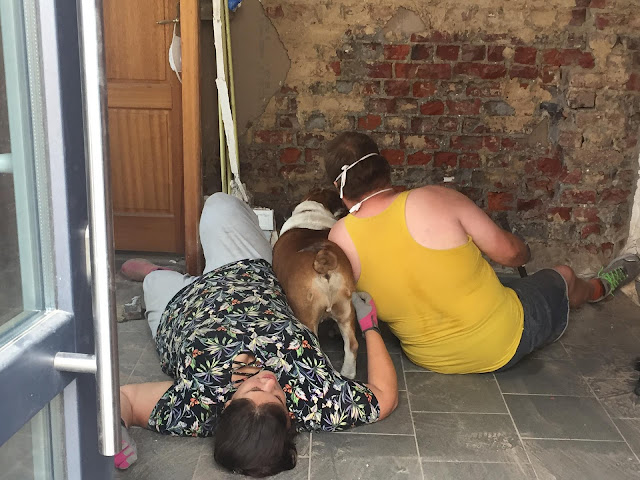 Goodbye my doggie, goodbye my friend 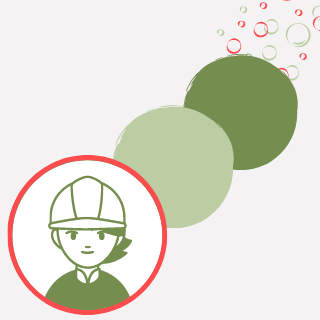